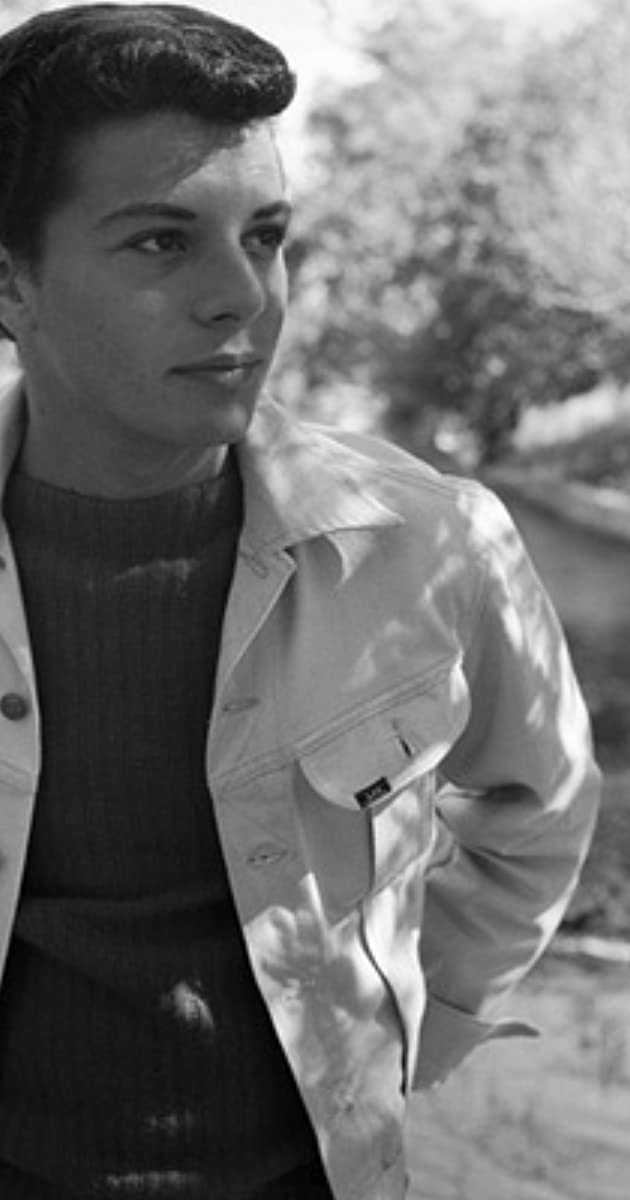 One of a spate of teen idols to come out of Philadelphia in the 1950s and 1960s, Frankie Avalon–unlike many of the others–actually had a musical background, having been taught to play the trumpet at a very young age by his father. As a youth Avalon performed in local clubs and theaters. He won a local TV talent contest playing a trumpet solo. In 1951, at age 12, he was in a band called Rocco and the Saints, which included another soon-to-be famous teen singer, Bobby Rydell. In 1952 he was performing at a private party held for singer Al Martino. A talent scout who was also at the party was impressed enough by Avalon to get him an appearance on Jackie Gleason’s TV show, which led to more television appearances. In 1954 he made two singles for “X” Records, an RCA Victor subsidiary. Both were instrumentals featuring Avalon playing his trumpet: “Trumpet Sorrento” and “”Trumpet Tarantella.” He eventually landed a recording contract with Philadelphia’s Chancellor Records, and he recorded “Cupid” and “Teacher’s Pet”. These records got him his first movie role, a small part in Disc Jockey Jamboree (1957) designed to promote “Teacher’s Pet.” His next record was “DeDe Dinah”, a song written by his managers (and one for which he had so little respect that he pinched his nose while recording it, resulting in its extremely nasal sound). After an appearance on Dick Clark’s teen dance show Bandstand (1952), sales of the record zoomed and it eventually sold more than a million copies. In 1959, after two more big hits (“Ginger Bread” and “I’ll Wait for You”) he recorded the song he is probably best known for, the million-selling “Venus.” However, as 1960 rolled around his career began to wane and his record sales dropped precipitously. He soon began taking small parts in movies, most notably in John Wayne’s The Alamo (1960). He began to get somewhat bigger parts and had his first starring role in Drums of Africa (1963). His movie career really took off, however, when he was paired with former Mousketeer Annette Funicello in Beach Party (1963) and its string of sequels. These films, with their combination of surfing, low comedy, dancing and “beach bunnies” in bikinis, struck a nerve with teenage audiences, were produced for peanuts and made a fortune. Avalon still recorded songs for Chancellor and other labels, but now he was far better known among younger audiences for his movies than for his records. In 1985 he began touring with fellow teen idols Rydell and Fabian in an oldies show called “The Golden Boys of Bandstand,” which was a rousing success. In 1987 he and Funicello were reunited in Back to the Beach (1987), an homage to, and parody of, their earlier “beach” movies. Avalon still makes personal appearances and tours, many with and for his old friend and mentor Dick Clark.