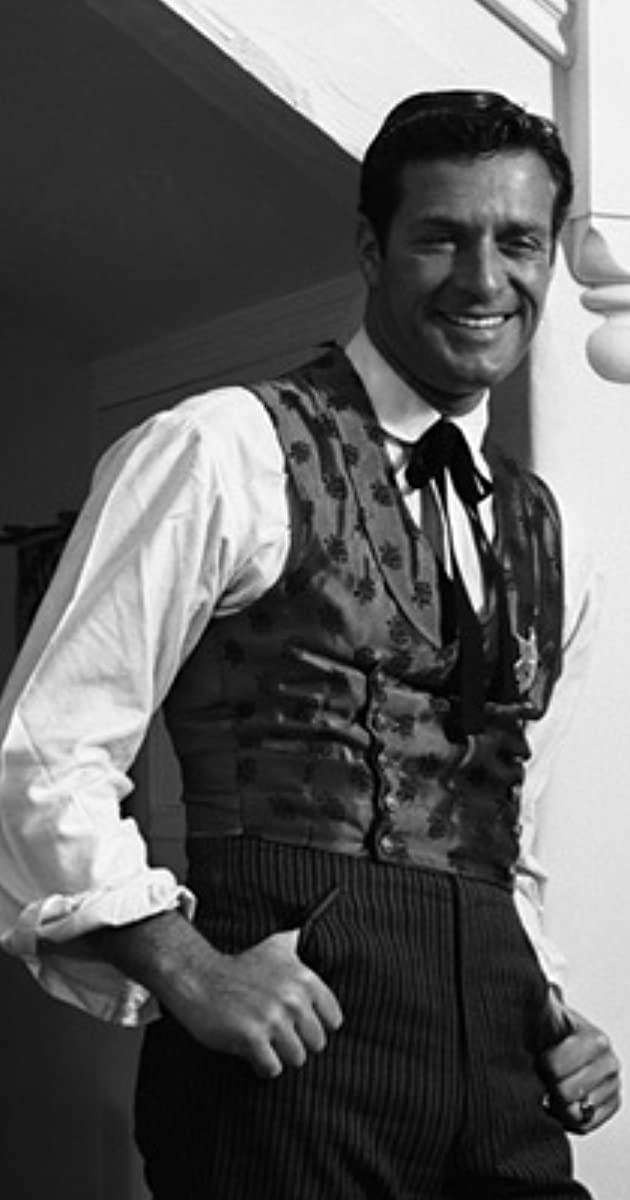 Hugh O’Brian had the term “beefcake” written about him during his nascent film years in the early 1950s, but he chose to avoid the obvious typecast as he set up his career.

O’Brian was born Hugh Charles Krampe in Rochester, New York, to Ohio-born parents Edith Lillian (Marks) and Hugh John Krampe, a United States Marine Corps officer. His paternal grandparents were German immigrants, while his mother was of half German Jewish and half English/Scottish descent. O’Brian first attended school at New Trier High School in Winnetka, Illinois, then Kemper Military School in Booneville, Missouri. Moving from place to place growing up, he managed to show off his athletic prowess quite early. By the time he graduated from high school, he had lettered in football, basketball, wrestling and track. Originally pursuing law, he dropped out of the University of Cincinnati in 1942 (age 19) and enlisted in the Marine Corps. Upon his discharge he ended up in Los Angeles. Hugh joined a little theater group and a Santa Barbara stock company, where he developed his acting chops and slowly built up his résumé. He was discovered for TV by director/actress Ida Lupino, which opened the door to his signing with Universal Studios for films.

Hugh’s gentlemanly ruggedness, similar to a James Garner or a Gene Barry, was ideal for pictures, and his lean physique and exceptionally photographic mug had the modest, brown-eyed, curly-haired looker plastered all over the movie magazines. He rebelled against the image for the most part and, as a result, his years with Universal were not as fruitful as they could have been. For the duration, he was pretty much confined as a secondary player to standard action pictures such as Red Ball Express (1952), Son of Ali Baba (1952) and Seminole (1953). It was Rock Hudson who earned all of the Universal glamour guy roles and the out-and-out stardom that could easily have been Hugh’s. In 1954, he left Universal to freelance but did not fare any better until offered the starring role in The Life and Legend of Wyatt Earp (1955) on TV, a year later. It became a mainstay hit and Hugh an “overnight” star. During his six-year run on the western classic, he managed to show off his singing talents on variety shows and appeared on Broadway. The handsome bachelor remained a durable talent throughout the 60s and 70s with plentiful work on the summer stock stage and on TV, including the series Search Control (1972), but never got the one role to earn the critical attention he merited.

A sports enthusiast, his hobbies included sailing, tennis, swimming and long-distance bicycling, and his many philanthropic efforts did not go unrecognized. His proudest achievement was the Hugh O’Brian Youth Leadership (HOBY), which he founded in 1958 after spending considerable time with Dr. Albert Schweitzer and his clinic in Africa. Struck by the impassioned work being done by Schweitzer, O’Brian set up his own program to help develop young people into future leaders. O’Brian was awarded honorary degrees by several prestigious institutions of higher learning. The perennial bachelor finally “settled down” and tied the knot at age 81 with longtime companion Virginia Barber, who was close to three decades his junior. They lived in his Benedict Canyon home.