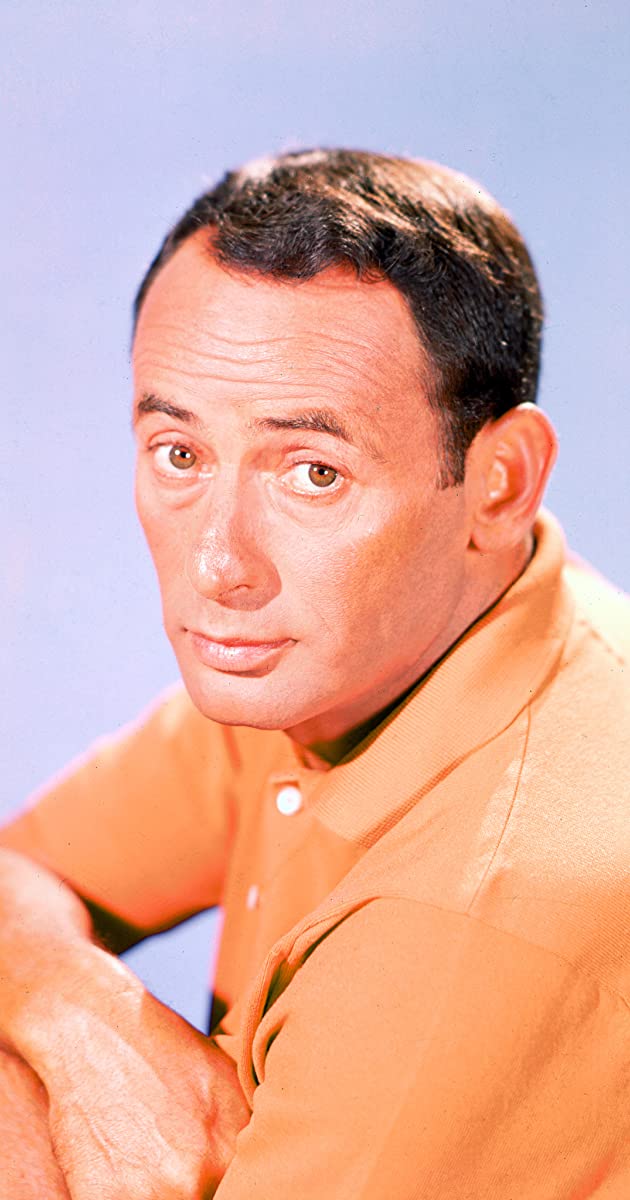 Perpetually glum standup comedian Joey Bishop was born Joseph Abraham Gottlieb on February 3, 1918, in the Bronx, New York. He was the youngest of five children of Chana “Anna” (Siegel) and Jacob Gottlieb, a bicycle repairman. His father was an Austrian Jewish immigrant and his mother was a Romanian Jew. He was raised in Philadelphia and learned while growing up how to tap dance, do imitations and play the mandolin and banjo. Dropping out of high school at 18, he started out in the humor business in vaudeville as part of a comedy act with his brother. Billed as “Joey Gottlieb” at the time, he later joined a comedy group that called themselves “The Bishop Trio” and kept the last name for himself after the team broke up. His nascent career was interrupted while serving in the Army during WWII, but quickly resumed things after his discharge in 1945. He appeared on television as early as 1948, but it took a while before he caught on. A master ad-libber, he became a nitery specialist at such establishments as the Latin Quarter, and served as an opening act for a number of stars, including Frank Sinatra, in the mid-50s. As his reputation increased, he became a steadfast cog on the talk show, sitcom and game show circuits. A frequent and amusing guest panelist on What’s My Line? (1950), the jug-eared jokester went on to guest-host on the The Tonight Show Starring Johnny Carson (1962) a record 177 times. He also frequently appeared as a guest for Steve Allen and Jack Paar in their earlier late-nite formats.

Bishop entered the sitcom venue in the early 1960s. On his first show, The Joey Bishop Show (1961), he played Joey Barnes, the host of a TV talk show in New York. Abby Dalton came on board in the second season as wife Ellie. Among his co-stars were up-and-coming stars Bill Bixby and Marlo Thomas and such character veterans as Joe Besser, of The Three Stooges fame, and Mary Treen were brought aboard for stronger support. This popular show lasted four seasons. Life imitated art several years later when Bishop went on to compete against Carson for the late-night viewing audience with his own talk show The Joey Bishop Show (1967) for ABC. The show was no match for Carson, however, and quickly dwindled in ratings, fading away after two years. His co-host/sidekick/foil was none other than Regis Philbin. Dick Cavett eventually replaced him to fill the ABC midnight void.

Relatively overlooked for his work on film, Bishop did show some promise early in the game with occasional straight roles that veered away from his sarcastic comedy demeanor with such roles in The Deep Six (1958), The Naked and the Dead (1958) and Onionhead (1958). He would also generate public interest as the less-than-slick member of Hollywood’s “Rat Pack”, which was comprised of ultra-hip pals Frank Sinatra, Dean Martin, Sammy Davis Jr. and Peter Lawford. Known as “Sinatra’s comic” at one time (for having frequently opened for the star), Bishop wrote material and serving as the emcee for many of the clan’s Las Vegas shows in the 1960s. In addition he appeared in the “Rat Pack”-oriented movies Ocean’s Eleven (1960) and Sergeants 3 (1962), but the straight-laced comedian later butted heads with the party-hearty Sinatra and split while the next film Robin and the 7 Hoods (1964) was in preparation. Elsewhere, he appeared as either a foil, sidekick, or guest cameos in such standard movies as Johnny Cool (1963), Texas Across the River (1966) with Dean Martin, Who’s Minding the Mint? (1967) and even Valley of the Dolls (1967).

Once his late night TV show folded he returned to night clubs for a time but gradually withdrew more and more from the show-biz limelight in the 1970s. He appeared in only three films after this point — The Delta Force (1986), Betsy’s Wedding (1990) and Trigger Happy (1996) — and showing up on a rare occasion as a TV guest. Married to Sylvia Ruzga since 1941, their son Larry Bishop is an actor-turned-director and producer. Long retired and the last surviving “Rat Pack” member after Sinatra’s death in 1998, his wife Sylvia of 58 years died of cancer in 1999. Joey, in failing health for some time, died of multiple organ failure on October 17, 2007, at his Newport Beach, California home.