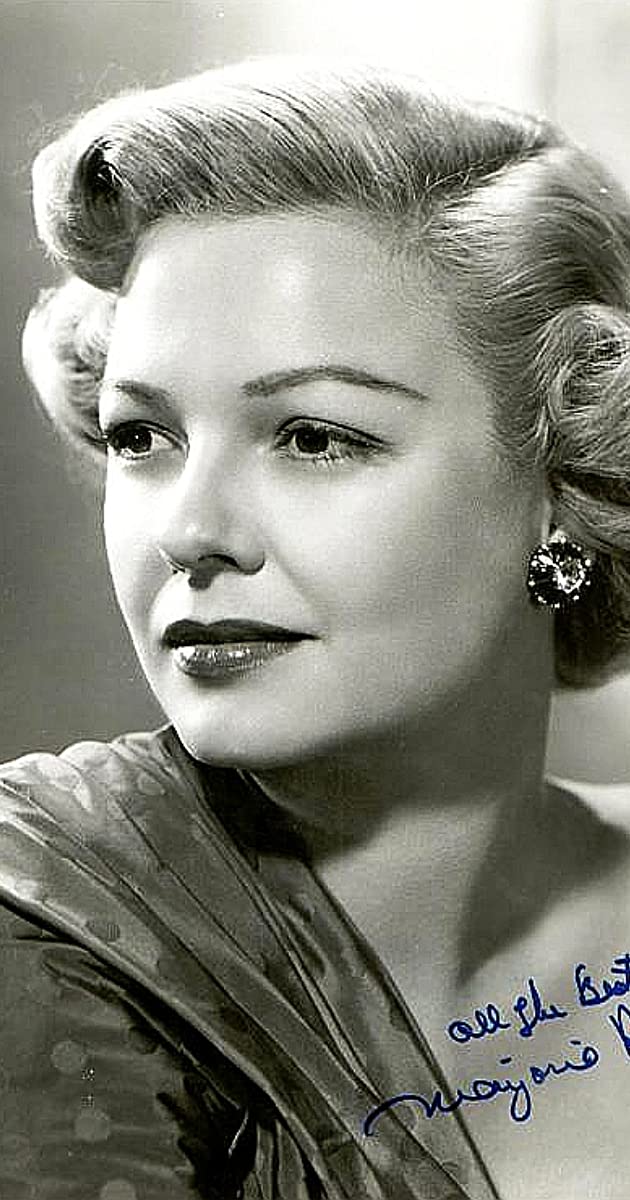 Bright, vivacious Marjorie Reynolds (née Marjorie Goodspeed) was born in Idaho on August 12, 1917 to a doctor and homemaker, and raised in Los Angeles. Making her film debut at age 6, she “retired” after only a few years in favor of a normal education. She returned in the mid-30s, as a teenager this time, and began the typical assembly-line route of extra and bit roles for various mega studios, this time billed as Marjorie Moore. Her first speaking role was in Columbia Studio’s programmer Murder in Greenwich Village (1937), this time billed as Marjorie Reynolds (her first husband’s last name), a moniker she kept for the duration of her career. The blonde (originally brunette) actress then went through a rather unchallenging prairie flower phase opposite Hollywood’s top western stars such as Tex Ritter, Buck Jones, Roy Rogers and Tim Holt. It all paid off, however, when she won the top female role opposite Bing Crosby and Fred Astaire in the seasonal film classic Holiday Inn (1942), a role originally designed for Mary Martin. It remains Marjorie’s most popular and cherished role on film, but it did not help her make a permanent transition into ‘A’ quality fare. She continued as a dependable “B” co-lead in such films as Up in Mabel’s Room (1944), Song of Broadway (1946), and Heaven Only Knows (1947), with an exciting movie offer such as Fritz Lang’s Ministry of Fear (1944) coming her way on a rare occasion. Along with maturity and a new entertainment medium (television) in the 50s came a return to her natural hair color. As William Bendix’s patient, resourceful brunette wife on the comedy TV series The Life of Riley (1953), Marjorie became a semi-household name. Her career took a steep decline following its demise five years later and she was only sporadically seen in films, commercials and TV guest spots after that. Married twice, her first husband was Jack Reynolds, who was an Assistant Casting Director for Samuel Goldwyn. They had one daughter, Linda, before divorcing in 1952 after 16 years. Second husband, film editor John Whitney, worked for a time in the 40s as an actor. They were married for 32 years until his death in 1985. Long retired, Marjorie died in 1997 of congestive heart failure after collapsing while walking her dog. Though she didn’t fully live up to her potential as a serious, formidable actress, her gentle charm and obvious beauty certainly spruced up the 60+ films in which she appeared.