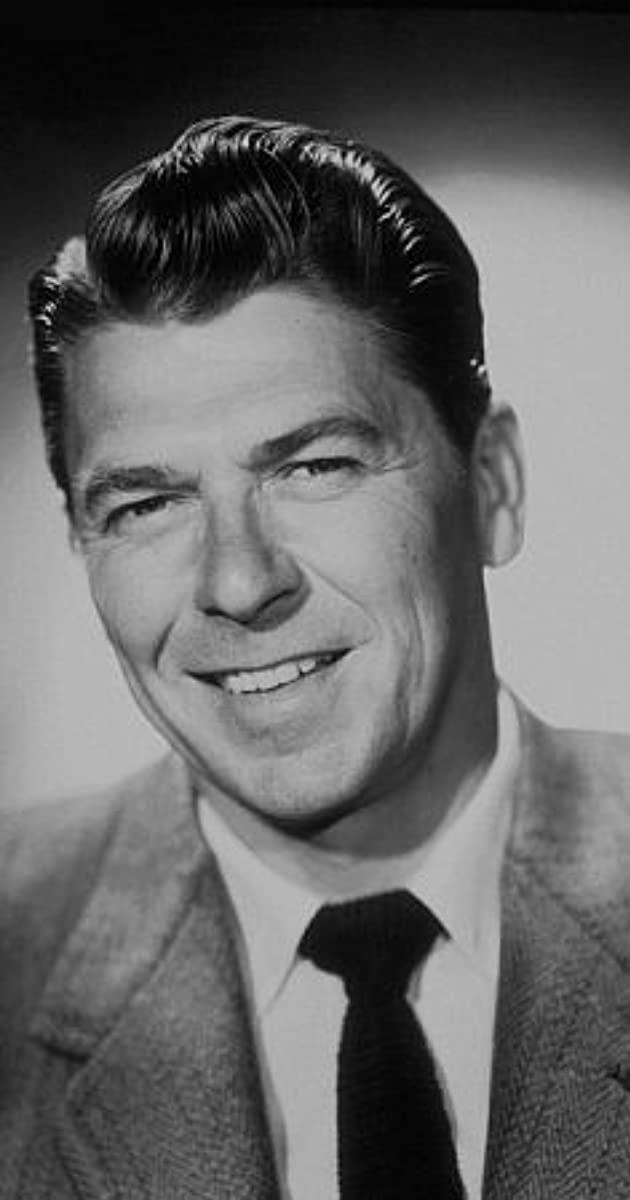 Ronald Reagan had quite a prolific career, having catapulted from a Warner Bros. contract player and television star, into serving as president of the Screen Actors Guild, the governorship of California (1967-1975), and lastly, two terms as President of the United States (1981-1989).

Ronald Wilson Reagan was born in Tampico, Illinois, to Nelle Clyde (Wilson) and John Edward “Jack” Reagan, who was a salesman and storyteller. His father was of Irish descent, and his mother was of half Scottish and half English ancestry.

A successful actor beginning in the 1930s, the young Reagan was a staunch admirer of President Franklin D. Roosevelt (even after he evolved into a Republican), and was a Democrat in the 1940s, a self-described ‘hemophiliac’ liberal. He was elected president of the Screen Actors Guild in 1947 and served five years during the most tumultuous times to ever hit Hollywood. A committed anti-communist, Reagan not only fought more-militantly activist movie industry unions that he and others felt had been infiltrated by communists, but had to deal with the investigation into Hollywood’s politics launched by the House Un-American Activities Committee in 1947, an inquisition that lasted through the 1950s. The House Un-American Activities Committee investigations of Hollywood (which led to the jailing of the “Hollywood Ten” in the late ’40s) sowed the seeds of the McCarthyism that racked Hollywood and America in the 1950s.

In 1950, U.S. Representative Helen Gahagan Douglas (D-CA), the wife of “Dutch” Reagan’s friend Melvyn Douglas, ran as a Democrat for the U.S. Senate and was opposed by the Republican nominee, the Red-bating Congressman from Whittier, Richard Nixon. While Nixon did not go so far as to accuse Gahagan Douglas of being a communist herself, he did charge her with being soft on communism due to her opposition to the House Un-American Activities Committee. Nixon tarred her as a “fellow traveler” of communists, a “pinko” who was “pink right down to her underwear.” Gahagan Douglas was defeated by the man she was the first to call “Tricky Dicky” because of his unethical behavior and dirty campaign tactics. Reagan was on the Douglases’ side during that campaign.

The Douglases, like Reagan and such other prominent actors as Humphrey Bogart and Edward G. Robinson, were liberal Democrats, supporters of the late Franklin D. Roosevelt and his New Deal, a legacy that increasingly was under attack by the right after World War II. They were NOT fellow-travelers; Melvyn Douglas had actually been an active anti-communist and was someone the communists despised. Melvyn Douglas, Robinson and Henry Fonda – a registered Republican! – wound up “gray-listed.” (They weren’t explicitly black-listed, they just weren’t offered any work.) Reagan, who it was later revealed had been an F.B.I. informant while a union leader (turning in suspected communists), was never hurt that way, as he made S.A.G. an accomplice of the black-listing.

Reagan’s career sagged after the late 1940s, and he started appearing in B-movies after he left Warner Bros. to go free-lance. However, he had a eminence grise par excellence in Lew Wasserman, his agent and the head of the Music Corp. of America. Wasserman, later called “The Pope of Hollywood,” was the genius who figured out that an actor could make a killing via a tax windfall by turning himself into a corporation. The corporation, which would employ the actor, would own part of a motion picture the actor appeared in, and all monies would accrue to the corporation, which was taxed at a much lower rate than was personal income. Wasserman pioneered this tax avoidance scheme with his client James Stewart, beginning with the Anthony Mann western Winchester ’73 (1950) (1950). It made Stewart enormously rich as he became a top box office draw in the 1950s after the success of “Winchester 73” and several more Mann-directed westerns, all of which he had an ownership stake in.

Ironically, Reagan became a poor-man’s James Stewart in the early 1950s, appearing in westerns, but they were mostly B-pictures. He did not have the acting chops of the great Stewart, but he did have his agent. Wasserman at M.C.A. was one of the pioneers of television syndication, and this was to benefit Reagan enormously. M.C.A. was the only talent agency that was also allowed to be a producer through an exemption to union rules granted by S.A.G. when Reagan was the union president, and it used the exemption to acquire Universal International Pictures. Talent agents were not permitted to be producers as there was an inherent conflict of interest between the two professions, one of which was committed to acquiring talent at the lowest possible cost and the other whose focus was to get the best possible price for their client. When a talent agent was also a producer, like M.C.A. was, it had a habit of steering its clients to its own productions, where they were employed but at a lower price than their potential free market value. It was a system that made M.C.A. and Lew Wasserman, enormously wealthy.

The ownership of Universal and its entry into the production of television shows that were syndicated to network made M.C.A. the most successful organization in Hollywood of its time, a real cash cow as television overtook the movies as the #1 business of the entertainment industry. Wasserman repaid Ronald Reagan’s largess by structuring a deal by which he hosted and owned part of General Electric Theater (1953), a western omnibus showcase that ran from 1954 to 1961. It made Reagan very comfortable financially, though it did not make him rich. That came later.

In 1960, with the election of the Democratic President John F. Kennedy, the black and gray lists went into eclipse. J.F.K. appointed Helen Gahagan Douglas Treasurer of the United States. About this time, as the civil rights movement became stronger and found more support among Democrats and the Kennedy administration, Reagan – fresh from a second stint as S.A.G. president in 1959 – was in the process of undergoing a personal and political metamorphosis into a right-wing Republican, a process that culminated with his endorsing Barry Goldwater for the Republican presidential nomination in 1964. (He narrated a Goldwater campaign film played at the G.O.P. Convention in San Francisco.) Reagan’s evolution into a right-wing Republican sundered his friendship with the Douglases. (After Reagan was elected President of the United States in 1980, Melvyn Douglas said of his former friend that Reagan turned to the right after he had begun to believe the pro-business speeches he delivered for General Electric when he was the host of the “G.E. Theater.”)

In 1959, while Reagan was back as a second go-round as S.A.G. president, M.C.A.’s exemption from S.A.G. regulations that forbade a talent agency from being a producer was renewed. However, in 1962, the U.S. Justice Department under Attorney General Robert F. Kennedy successfully forced M.C.A. – known as “The Octopus” in Hollywood for its monopolistic tendencies – to divest itself of its talent agency.

When Reagan was tipped by the California Republican Party to be its standard-bearer in the 1965 gubernatorial election against Democratic Governor Pat Brown, Lew Wasserman went back in action. Politics makes strange bedfellows, and though Wasserman was a liberal Democrat, having an old friend like Reagan who had shown his loyalty as S.A.G. president in the state house was good for business. Wasserman and his partner, M.C.A. Chairman Jules Styne (a Republican), helped ensure that Reagan would be financially secure for the rest of his life so that he could enter politics. (At the time, he was the host of “Death Valley Days” on TV.)

According to the Wall Street Journal, Universal sold Reagan a nice piece of land of many acres north of Santa Barbara that had been used for location shooting. The Reagans sold most of the ranch, then converted the rest of it, about 200 acres, into a magnificent estate overlooking the valley and the Pacific Ocean. The Rancho del Cielo became President Reagan’s much needed counterpoint to the buzz of Washington, D.C. There, in a setting both rugged and serene, the Reagans could spend time alone or receive political leaders such as the Soviet President Mikhail Gorbachev, Margaret Thatcher, and others.

Reagan was known to the world for his one-liners, the most famous of them was addressed to Mikhail Gorbachev in 1987. “Mister Gorbachev, tear down this wall” said Reagan standing in front of the Berlin Wall. That call made an impact on the course of human history.