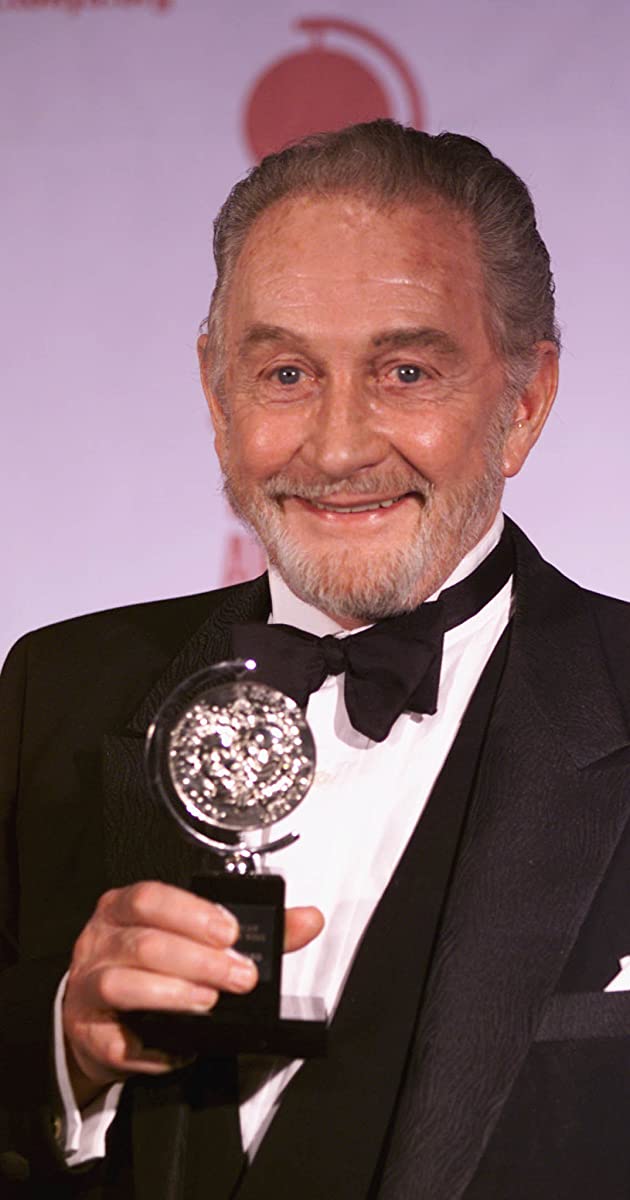 The ever-impressive, chameleon-like British character actor Roy Dotrice was born on the Island of Guernsey, one of the Channel Islands off the coast of France, which is part of the United Kingdom. He was the first-born child of Louis and Neva Dotrice who prospered as bakers. The Germans occupied the island in 1940 and he and his mother and brother escaped to England.

Advancing his real age, Roy joined the Royal Air Force at age 16 and was trained as a wireless operator and air gunner. In 1942 his plane was shot down and he was captured where he served out the remainder of WWII (over three years) as a prisoner of war in Germany. He was introduced to the idea of performing when he took part in various makeshift concerts in order to raise the spirits of his fellow captives.

Following WWII and his release, Roy decided to pursue his acting ambitions. After studying at the Royal Academy of Dramatic Art, he began appearing in English repertory where he met and married (1947) actress Kay Dotrice who at the time was performing under her given name of Katherine (Kay) Newman. Throughout the early post-war years, the couple performed together in repertory with Charles Denville and the Denville Players. At different times he was a member of the Liverpool, Manchester and Oldham repertory theatres. Also during this great time of productivity, Roy produced and directed some three hundred stage plays. He formed his own troupe, the Guernsey Theatre Company, in 1955. The highlight of his theatrical career, however, began in 1957 when Roy became a member of the Shakespeare Memorial Theatre at Stratford, England, (later the Royal Shakespeare Company). For the next nine years he performed in a lengthy succession of the Bard’s works, first in small parts as various players, officers and gentlemen. He subsequently went on to become a notable Iago, Falstaff and Julius Caesar, among others. A popular performer, he had an uncanny ability to play much older than he was. He later went on to perform with the American Shakespearean Festival.

The notoriety he received from his abundant classical theatre experience led directly to radio, film, television and Broadway offers. Roy has appeared in a number of Broadway productions over the years, receiving a Tony nomination for his work in “A Life” and finally winning the trophy for his heralded performance in the 2000 revival of “A Moon for the Misbegotten” starring Cherry Jones and Gabriel Byrne. Known for his considerable success in one-man shows such as Abraham Lincoln, Charles Dickens, Will Rogers and Winston Churchill, his superb one-person show “Brief Lives”, drawn from the Elizabethan diaries of John Aubrey, played for over 1,700 performances over a period of nearly a decade. At one time this set a record for a solo performance and was listed in the “Guinness Book of World Records”.

Dotrice made his credited feature movie debut supporting Kirk Douglas and Richard Harris in The Heroes of Telemark (1965), and has since lent class and distinction to a spattering of films. Among his list of credits include the bawdy comedy Lock Up Your Daughters! (1969); the sumptuous biopic Nicholas and Alexandra (1971); the Oscar-winning Amadeus (1984), Milos Forman’s adaptation of composer Mozart’s life in which Roy portrayed Mozart’s stern and domineering father Leopold; and The Cutting Edge (1992) as an Olympic skating coach.

Perhaps better remembered on the small screen, he appeared magnanimously as a host of monarchs including his Edward IV in The Wars of the Roses (1965) and King George IV in the syndicated miniseries Shaka Zulu (1986). To American audiences he is probably best known as Jacob Wells, the Beast’s surrogate father, in the dramatic series Beauty and the Beast (1987). Dotrice was also cast in the recurring role of Father Barrett, a Catholic priest and confidante of Judge Henry Bone (played by Ray Walston), on the acclaimed Emmy-winning drama Picket Fences (1992).

Since the end of the 1970s he has lived and worked primarily in America. More recently he appeared on stage reviving his outstanding 1993 role as George Bernard Shaw in “The Best of Friends” in 2006. His devoted wife Kay died on August 2, 2007, after 60 years of marriage. The couple has three daughters (Michele, Karen, Yvette), all whom at one time or another were actresses. Karen, who is now primarily out of the business, became the best known perhaps for her childhood Disney portrayals, notably in Mary Poppins (1964). Combined, his daughters have presented him with seven grandchildren.