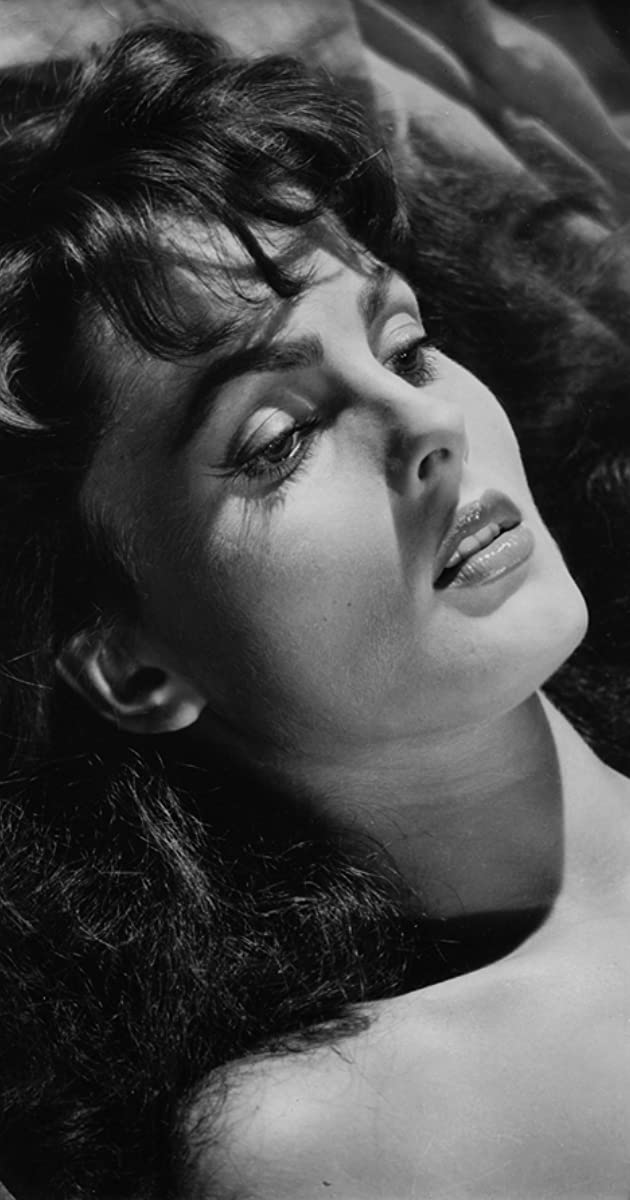 Gorgeous was too tame a word for this foreigner stunner. Glamorous brunette beauty Ursula Thiess was born Ursula Schmidt in Hamburg, Germany on May 15, 1924, the daughter of Hans Schmidt, who managed a printing company, and Wilhelmine Lange, her turbulent childhood including working as compulsory farm laborer on the orders of the Nazi government when the teen refused to join the paramilitary Hitler Youth Movement. She later began her entertainment career in her native homeland appearing on the stage and dubbing female voices in American films.

Married to director Georg Thieß, the couple’s marriage was a relatively unhappy one and they eventually divorced. With two children (Manuela and Michael) in tow, she found work in the late 1940s/early 1950s as a fashion model in Berlin. She left postwar Germany at the urging of Howard Hughes and signed up with his RKO company for film representation.

Billed as “The Most Beautiful Girl in the World” during her initial build-up, her debut movie was as a half caste English/India(n) girl in the outdoor drama Monsoon (1952) opposite the handsome, frequently bare-chested George Nader. While she failed to weave the same kind of foreign magic as that of Marlene Dietrich, she was far more beautiful and was voted “Most Promising Star of 1952” by Modern Screen Magazine and a Golden Globe the next year. This exotic temptation remained a fetching distraction amid the rugged scenery where, percentage-wise, the story and action remained strongly focused on her handsome he-man co-stars: Robert Stack in The Iron Glove (1954); Rock Hudson in Bengal Rifles (1954); and Glenn Ford in The Americano (1955); Robert Mitchum in Bandido! (1956), among others. Her Hollywood career wound up very short but sweet.

During her brief peak, Ursula met and eventually married the exceedingly handsome film star Robert Taylor (in 1954) and she subsequently abandoned her film career. Outside of her two children by her first marriage, Ursula had two more children (Terrance in 1955 and Tessa in 1959), by Taylor. Though she seemed quite content to be out of the limelight, she did appear with some regularity on her husband’s TV series The Detectives (1959) during its first season, playing a police reporter who has a brief affair with Taylor’s character. While raising her children was her prime job, she also became an active volunteer at a children’s hospital.

Following her son Michael’s tragic suicide from a drug overdose and husband Taylor’s death shortly thereafter from lung cancer, both in 1969, Ursula was glimpsed here and there in a light sprinkling of film and TV appearances before bowing out completely. Her last film was the completely overlooked Left Hand of Gemini (1972) with Richard Egan and Ian McShane.

Surviving an operation for a benign brain tumor in 1979, the former actress married wealthily for a third time and lived in Hawaii during part of that marriage, but would find herself widowed again in 1987 after 12 years. Known to be an excellent home decorator and gourmet cook, she eventually wrote an autobiography entitled “But I Have Promises to Keep” in 2003. Living in the Los Angeles area for the remainder of her life, she eventually entered an assisted facility in Burbank and died on June 19, 2010, at the age of 86, survived by her three remaining children.