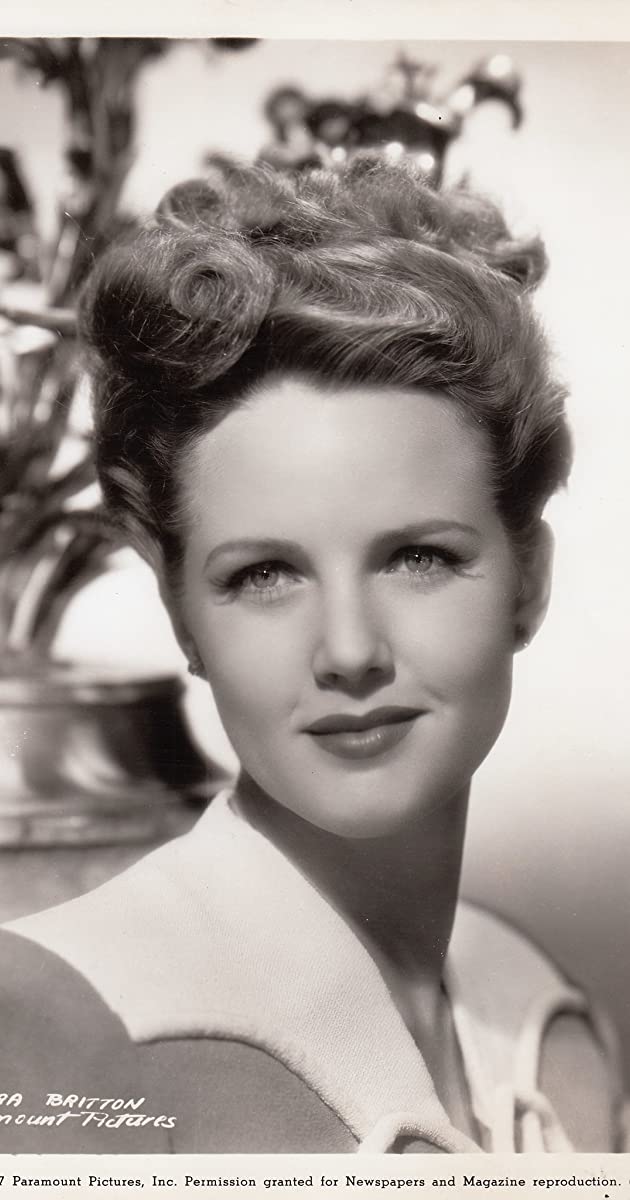 Radiant to a tee, well-coiffed and well-dressed Barbara Britton looked like she stepped out of a magazine when she entered into our homes daily as the ‘Revlon Girl’ on 50s and 60s TV. She sparkled with the best of them and managed to capture that “perfect wife/perfect mother” image with, well, perfect poise and perfect grace. Co-starring opposite some of Hollywood’s most durable leading men, including Randolph Scott (multiple times), Joel McCrea, Gene Autry, Jeff Chandler and John Hodiak, it’s rather a shame Barbara was rather obtusely used in Hollywood films, but thankfully her beauty and glamour, if not her obvious talent, would save the day and put the finishing touches on a well-rounded career.

It all began for sunny, hazel-eyed blonde Barbara Maureen Brantingham in equally sunny Long Beach, California on September 26, 1920 (1919 is incorrect, according to her son and several other sources). Attending Polytechnic High School, Barbara eventually taught Sunday school and majored in speech at Long Beach City College with designs of becoming a speech and drama teacher. Her interest in acting, however, quickly took hold and she decided, against the wishes of her ultra-conservative parents, to pursue the local stage. Barbara’s own personal ‘Hollywood’ story unfolded when, as a Pasadena Tournament of Roses parade representative of Long Beach, she was seen on the front pages of the newspaper, scouted out and signed by Paramount movie agents.

The surname Britton was a cherished family name and Barbara picked it as her stage moniker when Paramount complained that Brantingham was “too long to fit on a marquee.” She made her film debut with Secret of the Wastelands (1941), a Hopalong Cassidy western, and continued in bit parts for a time before finding modest but showier roles in such fare as Louisiana Purchase (1941), So Proudly We Hail! (1943) and Till We Meet Again (1944). She eventually earned higher visibility as a lead and second femme lead but was underserved for most of her film career, confined as a pretty, altruistic, genteel young thing in such durable but male-oriented films as A Man Called Sullivan (1945), The Virginian (1946), Monte Cristo’s Revenge (1946), Silver City (1948), and Champagne for Caesar (1950).

Barbara wisely turned to the stage and TV in the 1950s, making her TV debut on an episode of “Robert Montgomery Presents” in 1950 and her Broadway debut co-starring in the short-lived Peggy Wood comedy “Getting Married” the following year.

After co-starring a couple of seasons with Richard Denning on the TV program Mr. & Mrs. North (1952), Barbara earned major attention as Revlon’s lovely pitchwoman and remained on view in that capacity for 12 years. She appeared in Revlon commercials live for a number of programs, including “The $64,000 Question,” “The $64,000 Challenge,” “Revlon’s Big Party” and “The Ed Sullivan Show.” In between Barbara graced several of the top dramatic shows of the day, and co-starred intermittently in such “B” films as Bandit Queen (1950), The Raiders (1952), Bwana Devil (1952), Dragonfly Squadron (1954) and Night Freight (1955) before ending her movie run with The Spoilers (1955) opposite Jeff Chandler and Rory Calhoun.

Various Broadway shows included “Wake Up, Darling (1956), “How to Make a Man” (1961), and “Me and Thee” (1965). Other stage credits on the dinner theatre and summer stock circuits include “Last of the Red Hot Lovers”, “Mary, Mary,” “Barefoot in the Park” and “No, No, Nanette.” As time passed, more and more would be devoted to raising her family. Only occasionally seen in the 1970, Barbara sometimes appeared with her two children in such regional shows as “Best of Friends,” “Forty Carats” and “A Roomful of Roses”.

Married in 1945 to Eugene Czukor, a naturopathic physician at the time, he later became a psychiatrist when the family moved to New York City (Manhattan) in 1957. The couple raised two children — son Theodore (Ted or Theo) who appeared on the Canadian Shakespearean stage and later became a yoga instructor, and daughter Christina who grew up to become a model, actress, opera singer, music therapist and romance novelist. Both used the surname Britton in their respective performance careers. Sadly, two other children born to Barbara and husband Eugene, a girl and a boy, died at the hospital shortly after birth.

One of Barbara’s last roles was as a regular on the daytime soap One Life to Live (1968) in 1979. Her enjoyment on this show was short-lived as the vivacious actress was diagnosed with pancreatic cancer not long after. She died in January of 1980 at age 59.