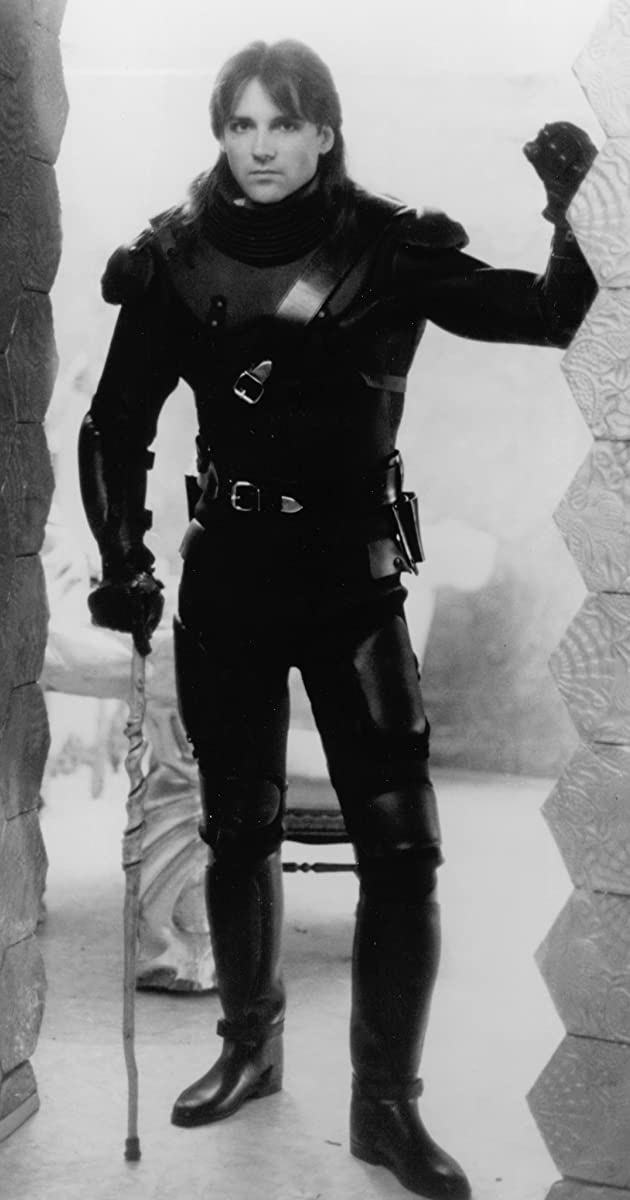 Michael Praed was born in Berkeley, England to Derrick and Kay Prince, but spent his early years in Iran because his father worked as an accountant for a petroleum company. Michael was sent back to England for a public school education, which he did not enjoy. He attended the Guildhall School of Music and Drama in London. As there was already a “Michael Prince” listed in Equity, Michael chose the surname “Praed” from the phone book. He began his career in repertory theatre before moving on to roles in London’s West End.

Praed’s first big break occurred in playing in Joseph Papp’s 1982 revival of “The Pirates of Penzance” with Tim Curry in the West End. The producers of “Robin of Sherwood” spotted Praed and cast him as Robin Hood. The BAFTA winning ‘Robin of Sherwood’ was a huge hit. After two successful seasons as Robin, Praed was lured to Broadway to star in “The Three Musketeers” with Brent Spiner and Chuck Wagner. His Broadway adventure led to him being cast in 1985 as Prince Michael of Moldavia in Aaron Spelling’s prime time soap “Dynasty”.

After a stint on “Dynasty”, Praed starred in the films “Nightflyers”, “Writer’s Block”, and ‘Son of Darkness: To Die For II’ . Between films, Michael Praed worked on writing and recording music in his own studio.

At the end of 1991, Praed left Los Angeles for the lead in an Irish production of “Carousel”. Immediately following the Rogers and Hammerstein musical, he found himself back in London playing the lead in the West End production of “Aspects of Love” by Andrew Lloyd Webber. The British televised mini-series, “Riders” followed, based on the best-selling novel by Jilly Cooper. His next stage endeavor was Harold Pinter’s terse, tense drama “The Caretaker”. In 1994 he starred opposite Susannah York in the drama “September Tide” in the West End.

Michael Praed then dived into the role of the devious, womanizing Gary in the comedy film “Staggered”, Martin Clunes’ first attempt at directing in 1994. Subsequently, he accepted the regular role in the British television series, ‘Crown Prosecutor’ as Marty James.

In 1995, he returned once again to the West End as a lead, this time opposite Rachel Weisz in Noel Coward’s “Design for Living”. The role was noteworthy in that Praed was brought as a replacement in the last two weeks of the run and learned the massive three act play over a single weekend.

The next year (spanning 1996 to 1997) was spent as the lead in Barry Manilow’s “Copacabana: The Musical”, on its first national tour of Britain.

He made a cameo as the Hitman in the film “Darkness Falls” with “Robin of Sherwood” comrade Ray Winstone before heading for North America. Once in the western hemisphere, Praed took the regular role of the Victorian aristocrat Phileas Fogg in the Canadian television series ‘The Secret Adventures of Jules Verne’ (2000). Like “Robin of Sherwood”, this television series developed a devoted following.

An appearance as The Queen in “9 Dead Gay Guys” in 2002 marked another venture into film. The comedy has won both pans and fans. Shunned at Cannes, the film won the Montreal Comedy Festival Comedia Award, as well as the Audience Award for Best Feature Film at the Dublin Gay and Lesbian Film Festival.

Switching gears, his next appearance was in Susan Stroman’s Tony Award winning musical “Contact” with Leigh Zimmerman back in London’s West End (2003). Praed and Zimmerman were teamed up again in Carl Djerassi’s comedy “Three on a Couch” at the highly regarded fringe theatre, the King’s Head, in 2004.

Other stage roles have been as Bernard Kersal in Somerset Maugham’s “The Constant Wife” (UK tour 2003), as F Scott Fitzgerald in the musical “Beautiful and Damned” (West End 2004), as Paul Sheldon in “Misery” with Susan Penhaligon (again at The King’s Head Theatre, 2006), as hare-brained Tom Madison in Brian Stewart’s “Killing Castro” (UK tour 2006), as cynical Neil in the debut of Derek Lister’s “Blue on Blue” (2006), and as Milo Tindle with Simon MacCorkindale as Andrew in Anthony Shaffer’s “Sleuth” (UK tour 2008).

In 2007, Praed was a cast member of the Blake’s 7 audio adventure ‘Rebel’ for B7 Media. The production was the result of a landmark agreement establishing performance rights and payment schedules for Equity members participating in internet podcasts.

The 2007 airing of a Hindenburg docudrama co-produced by the UK’s Channel Four International, Germany’s Zusammenarbeit and USA’s Smithsonian Museum, marked Michael Praed’s return to the television screen. He portrayed passenger Nelson Morris in a reexamination of the German zeppelin’s spectacular explosion over New Jersey on the eve of World War II.