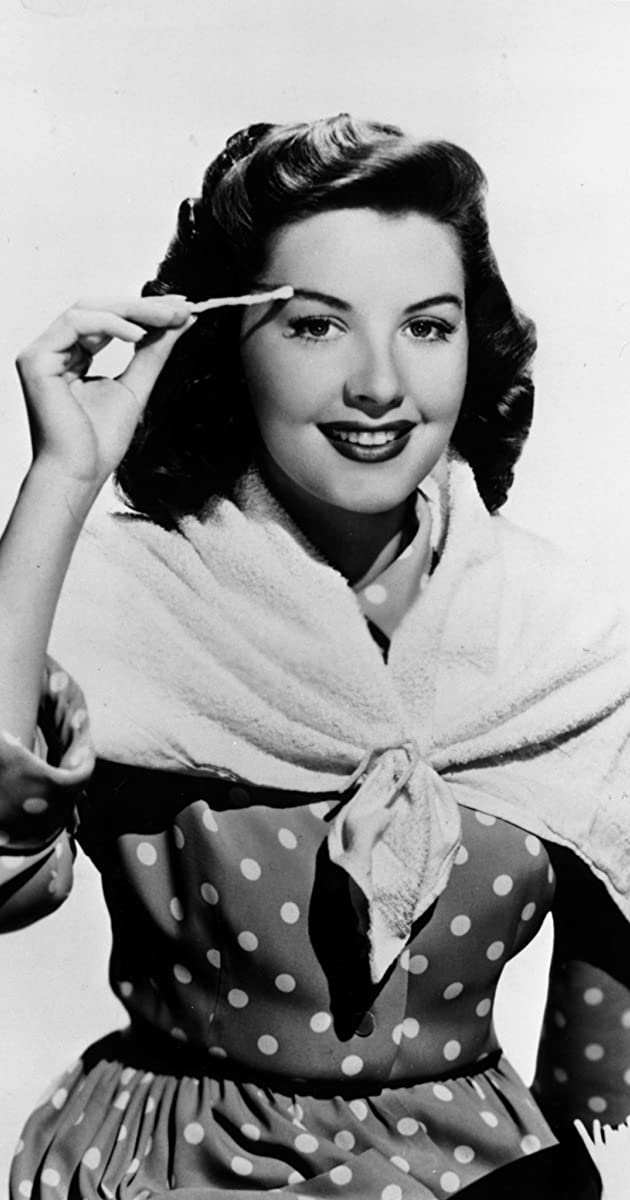 The lovely Barbara Bates, a demure but very troubled young spirit, began her career at age 19. Groomed in obscure starlet bits, it wasn’t until Warner Bros. signed her up in 1947 and perpetuated an appealing girl-next-door image that things started happening for her.

She was born Barbara Jane Bates, the eldest of three daughters to a postal clerk and a registered nurse on August 6, 1925. Barbara’s mother initially trained her shy daughter in ballet and the young beauty eventually modeled clothes as a teen out of high school. Fighting off a life-long paralyzing shyness,she nevertheless managed to be persuaded to enter a local Denver beauty contest, with the winner receiving two round-trip train tickets to Tinseltown. Not only did she win but meeting Cecil Coan, a United Artists publicist, during that Hollywood trip altered the course of her life forever. Coan, more than two decades older than Barbara, fell hard for the young beauty. A married man with children, he promised to guide her career and make her a star. He proved his worth and dedication to her when he left his wife and married Barbara.

Settling in Hollywood, it took some time before the actress started making decent strides as a bobbysoxer ingénue. She turned heads and supported herself initially as a pin-up girl, a job the shy beauty did not enjoy. She eventually rose in rank after a number of bit parts and, during her peak as a lead and second lead, appeared opposite a number of big-name stars, including Bette Davis in June Bride (1948); Danny Kaye in The Inspector General (1949); Myrna Loy and Jeanne Crain in both Cheaper by the Dozen (1950) and Belles on Their Toes (1952); Rory Calhoun in I’d Climb the Highest Mountain (1951); Elizabeth Taylor and Vittorio Gassman in Rhapsody (1954); and even Dean Martin & Jerry Lewis in their laugh-inducing vehicle, The Caddy (1953), to name a few.

Much of Barbara’s work in the above films was routine. Interestingly, the one role she will always be identified with is also one of the smallest parts given her during her brief tenure as leading lady. In the very last segment of All About Eve (1950), Barbara turns up in the role of “Phoebe”, a devious school girl and wannabe actress who shows startling promise as a future schemer along the lines of her equally ruthless idol, “Eve Harrington”, superbly played by Anne Baxter. Barbara’s image is enshrined in the picture’s very last scene–posing in front of a three-way mirror while clutching Baxter’s just-received acting award. It is this brief, breathtaking moment for which she will best be remembered.

Barbara’s on-and-off-screen life started unraveling not long afterward, succumbing to extreme mood shifts, insecurity, ill health and chronic depression to the point of being taken off important movie assignments. By age 30 she was washed up in Hollywood, and she and her Svengali-like husband Coen, who made all of Barbara’s decisions for her, tried to salvage her career in England. Things looked somewhat promising at first when she was picked up by the Rank Organization and co-starred with John Mills and Michael Craig in two dramatic suspense films, but the films, however, were mediocre. She again started showing signs of instability to the point where she was dropped from two films and the Rank Organization was forced to release her from her contract.

The couple returned to Hollywood where old friend Rory Calhoun cast her in a picture he was producing and starring in called Apache Territory (1958). Emotionally unable to withstand the pressures of Hollywood any more, Barbara abandoned her career, save for a 1962 appearance in the British TV series The Saint (1962) starring Roger Moore.

Barbara was not heard of again until her March 1969 death. It was learned that she had retreated to her hometown of Denver and worked in various minor job capacities, including stints as a secretary, dental assistant and hospital aide. Her much older husband and chief supporter, Cecil Coan, died of cancer in January of 1967, and Barbara fell apart. Although she remarried in December of 1968 to a childhood friend, sportscaster William Reed, she remained increasingly despondent and committed suicide just four months later. She was found dead in her car by her mother in her mother’s garage of carbon monoxide poisoning. Another sad and tragic ending to a promising Hollywood beauty who seemed destined to having it all.