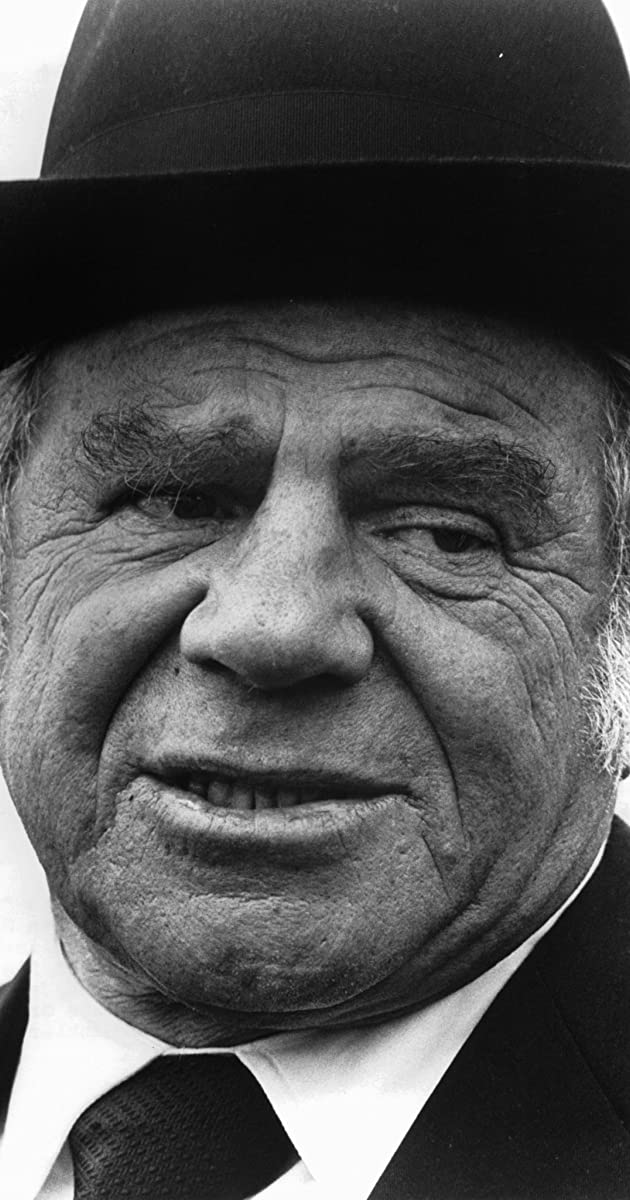 Lionel Stander, the movie character actor with the great gravelly voice, was born on January 11th, 1908 in The Bronx borough of New York City. Stander’s acting career was derailed when he was blacklisted during the 1950s after being exposed as a Communist Party member during the House Un-American Activities Committee hearings. In his own HUAC testimony in May 1953, Stander denounced HUAC’s use of informers, particularly those with mental problems.

Stander specialized in playing lovable hoodlums and henchmen and assorted acerbic, hard-boiled types. His physique was burly and brutish, and his head featured a square-jaw beneath a coarse-featured pan that was lightened by his charm. But it was his gruff, foghorn voice that made his fortune.

Stander attended the University of North Carolina, but after making his stage debut at the age of 19, he decided to give up college for acting. Along with a successful stage career, his unusual voice made him ideal for radio. His movie screen debut was in the comedy short Salt Water Daffy (1933) with Jack Haley and Shemp Howard. He went on to star in a number of two-reel comedy shorts produced at Vitaphone’s Brooklyn studio before moving to Hollywood in 1935, where he appeared as a character actor in many A-list features such as Nothing Sacred (1937).

John Howard Lawson, the screenwriter who was one of the Hollywood Ten and who served as the Communist Party’s cultural commissar in Hollywood, held up Stander as the model of a committed communist actor who enhanced the class struggle through his performances. In the movie No Time to Marry (1938), which had been written by Party member Paul Jarrico, Stander had whistled a few bars of the “Internationale” while waiting for an elevator.

Stander thought that the scene would be cut from the movie, but it remained in the picture because “they were so apolitical in Hollywood at the time that nobody recognized the tune”.

Stander had a long history of supporting left-wing causes. He was an active member of the Popular Front from 1936-39, a broad grouping of left-wing organizations dedicated to fighting reactionaries at home and fascism abroad. Stander wrote of the time, “We fought on every front because we realized that the forces of reaction and Faciscm fight democracy on every front. We, too, have been forced, therefore, to organize in order to combat them on every front: politically through such organizations as the Motion Picture Democratic Committee; economically through our guilds and unions; socially, and culturally through such organizations as the Hollywood Anti-Nazi League.”

The Front disintegrated when the U.S.S.R. signed a non-aggression pact with Nazi Germany, which engendered World War II by giving the Nazis the get-go to invade Poland (with the Soviet Union invading from the East). The Communist Party-USA dropped out of the Front and from anti-Nazi activities, and during the early days of the War, before Germany invaded the U.S.S.R. in June 1941, it tried to hamper US support for the UK under the aegis of supporting “peace,” including calling strikes in defense plants. Many communists, such as Elia Kazan, dropped out of the Party after this development, but many others stayed. These were the Stalinists that the American non-communist left grew to despise, and eventually joined with the right to destroy, though much of their antipathy after 1947-48 was generated by a desire to save themselves from the tightening noose of reaction.

Melvyn Douglas, a prominent liberal whose wife Helen Gahagan Douglas would later be a U.S. Representative from California (and would lose her bid for the Senate to a young Congressman named Richard Nixon, who red-baited her as “The Pink Lady”), had resisted Stander’s attempts to recruit him to the Party. “One night, Lionel Stander kept me up until dawn trying to sell me the Russian brand of Marxism and to recruit me for the Communist Party. I resisted. I had always been condemnatory of totalitarianism and I made continual, critical references to the U.S.S.R. in my speeches. Members of the Anti-Nazi League would urge me to delete these references and several conflicts ensued.”

Douglas, his wife, and other liberals were not adverse to cooperating with Party members and fellow travelers under the aegis of the MPDC, working to oppose fascism and organize relief for the Spanish Republic. They believed that they could minimize Communist Party influence, and were heartened by the fact that the Communists had joined the liberal, patriotic, anti-fascist bandwagon. Their tolerance of Communists lasted until the Soviet-Nazi Pact of August 1939. That, and the invasion of Poland by the Nazis and the USSR shattered the Popular Front.

Stander had been subpoenaed by the very first House Un-American Activities Committee inquisition in Hollywood, in 1940, when it was headed by Texas Congressman Martin Dies. The Dies Committee had succeeded in abolishing the Federal Theatre Project of the Works Progress Administration as a left-wing menace in 1939 (the FTP had put on a revival of Lawson’s play about the exploitation of miners, “Prcessional,” that year in New York). The attack on the FTP had been opposed by many liberals in Hollywood. Stung by the criticisms of Hollywood, the Dies Committee decided to turn its attention on Hollywood itself.

Sending investigators to Hollywood, Dies’ HUAC compiled a long-list of subversives, including Melvyn Douglas. John L. Leech, a police agent who had infiltrated the Communist Party before being expelled in 1937, presented a list of real and suspected communists to a Los Angeles County grand jury, which also subpoenaed Stander. The testimony was leaked, and the newspapers reported that Stander, along with such prominent Hollywood liberals as James Cagney, Humphrey Bogart, Frederic March and Francot Tone, had been identified as communists.

Committee chairman Dies offered all of the people named as communists the opportunity to clear themselves if they would cooperate with him in executive session. Only one of the named people did not appear, and Stander was the only one to appear who was not cleared. Subsequently, he was fired by his studio, Republic Pictures.

Stander was then subpoenaed to testify before the California Assembly’s Committee on Un-American Activities, along with John Howard Lawson, the union leader John Sorrell and others. During the strike led by Sorrell’s militant Conference of Student Unions against the studios in 1945, Stander was the head of a group of progressives in the Screen Actors Guild who supported the CSU and lobbied the guild to honor its picket lines. They were outvoted by the more conservative faction headed by Robert Montgomery, George Murphy and Ronald Reagan. The SAG membership voted 3,029 to 88 to cross the CSU picket-line.

Stander continued to work after being fired by Republic. He appeared in Hangmen Also Die! (1943), a film about the Nazi Reinhard Heydrich, who was assassinated by anti-fascists. After the bitter CSU strike, which was smeared as being communist-inspired by the studios, HUAC once again turned its gaze towards Hollywood, starting two cycles of inquisitions in 1947 and 1951. The screenwriter Martin Berkeley, who set a record by naming 155 names before the the second round of Committee hearings, testified that Stander had introduced him to the militant labor union leader Harry Bridges, long suspected of being a communist, whom Stander called “comrade”.

After being blacklisted, Stander worked as a broker on Wall Street and appeared on the stage as a journeyman actor. He returned to the movies in Tony Richardson’s The Loved One (1965), and he began his career anew as a character actor, appearing in many films, including Roman Polanski’s Cul-de-sac (1966) and Martin Scorsese’s New York, New York (1977). Other movies he appeared in included Promise Her Anything (1966), The Black Bird (1975), The Cassandra Crossing (1976), 1941 (1979), Cookie (1989) and The Last Good Time (1994), his final theatrical film.

Stander is best remembered for playing Max on TV’s Hart to Hart (1979) (1979-84) with Robert Wagner and Stefanie Powers, a role he reprised in a series of “Hart to Hart” TV movies. Stander also appeared on Wagner’s earlier TV series It Takes a Thief (1968) and on the HBO series Dream On (1990).

Lionel Stander died of lung cancer on November 30, 1994 in Los Angeles, California. He was 86 years old.