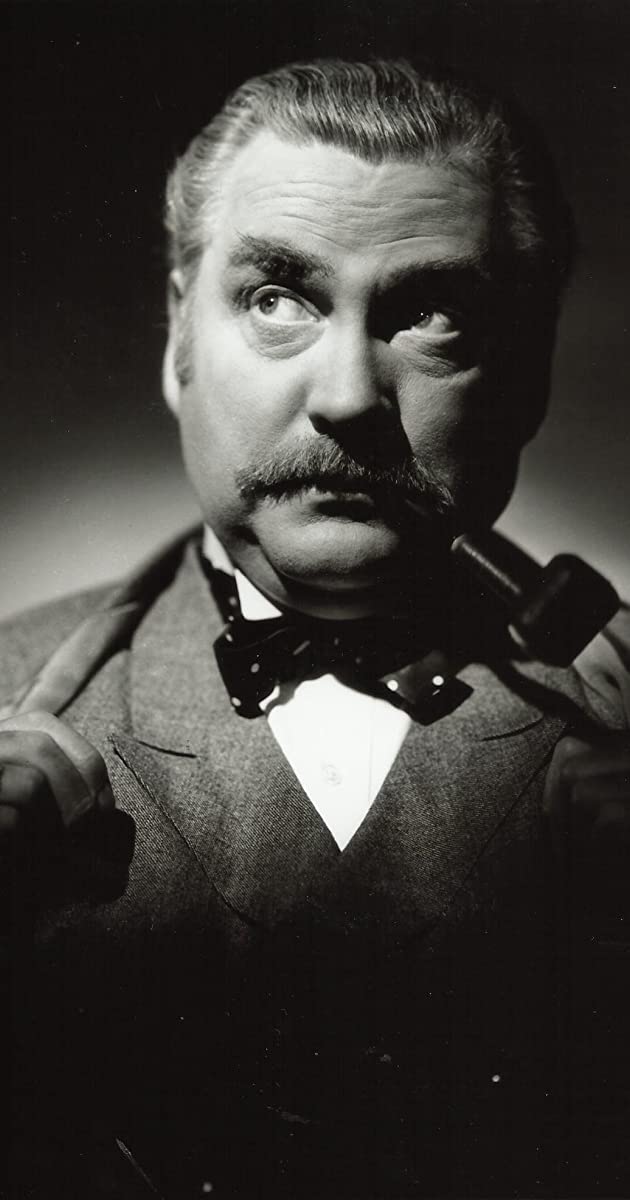 Nigel was, from the beginning, typecast as bumbling English aristocrats, military types or drawing room society snobs and, within the narrow parameters of his range, he was very, very good at playing these parts. Nigel Bruce was born in Mexico, where his father, Sir William W. Bruce, worked as an engineer. His family was part of English aristocracy, ever since Charles I. bestowed a baronetcy upon them in 1629 (William’s older brother Michael held the hereditary title). Nigel was educated in England at Grange, Stevenage and Abingdon. His first job was at a stockbroker’s firm. During World War I, he served in the British Army (like his future co-star, Basil Rathbone) where he received a serious leg wound and was for some time confined to a wheelchair.

Following his discharge, he turned to acting in 1919, but it wasn’t until ten years later that he achieved a breakthrough in Noël Coward’s ‘This was a Man’ on Broadway. Then followed the performance which was to set the standard for all his later work in Hollywood: the 1931 comedy “Springtime for Henry”. On the strength of his performance as Johnny Jelliwell, Fox offered Nigel the opportunity to reprise his role in the 1934 movie. Soon after that, Nigel was cast to star as British detective Bertram Lynch in a minor thriller, Murder in Trinidad (1934). The contemporary New York Times Review (May 16,1934) was skeptical about the film’s merit, but found Nigel’s performance ‘compelling’. After that followed a gallery of endearingly stereotypical ‘Britishers’: Squire Trelawny in Robert Louis Stevenson’s classic Treasure Island (1934), the Prince of Wales in The Scarlet Pimpernel (1934), Professor Holly in She (1935) and Sir Benjamin Warrenton in The Charge of the Light Brigade (1936). All, without exception, were roles in which Nigel felt perfectly at home.

In 1939, he teamed up with Basil Rathbone for the first two Holmes/Watson movies, The Hound of the Baskervilles (1939) and The Adventures of Sherlock Holmes (1939), filmed at 20th Century Fox. Both films had an authentic period feel for Victorian England and the chemistry between the two stars was just right. Three years later, Rathbone was contractually obliged to make a further series of twelve Holmes pictures at Universal, again co-starring Nigel as Dr. Watson. Unfortunately, these films were incongruously set in the 1940’s, often poorly written and irritatingly riddled with sermonizing wartime propaganda. Poor old Nigel had suddenly regressed from being ‘my friend and colleague’ to bumbling, feet shuffling comedy relief. In between filming the Sherlock Holmes series, Nigel portrayed his lovable self in two Hitchcock classics Rebecca (1940) (as Major Giles Lacy) and Suspicion (1941) (as ‘Beaky’).