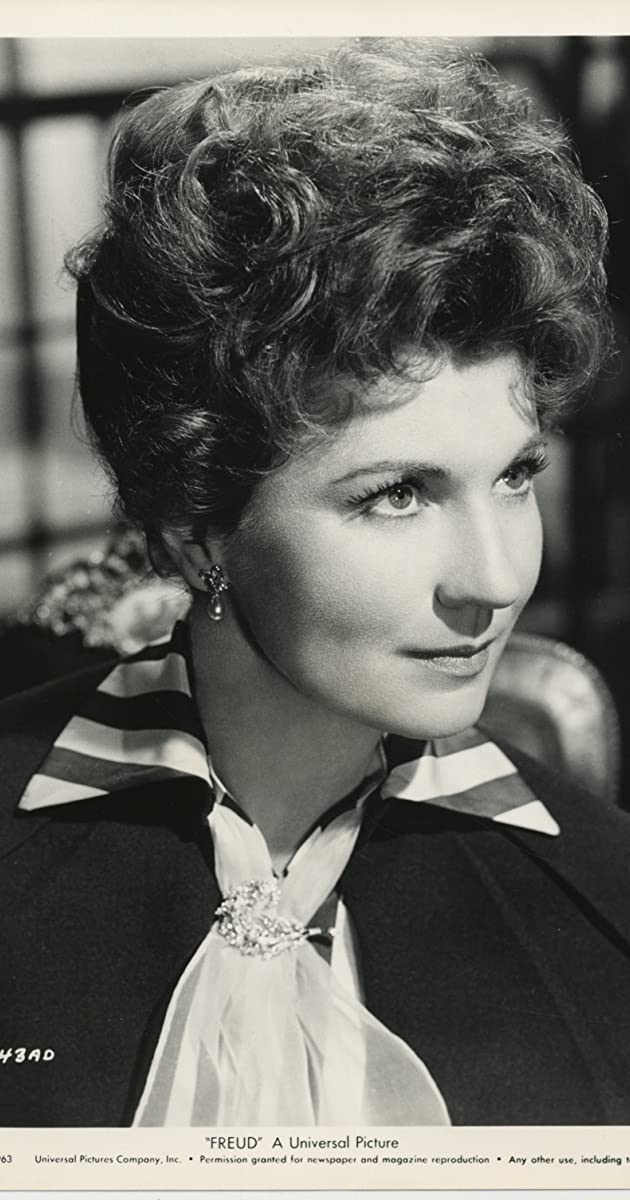 This vibrant Scottish character actress managed in her seven-decade career trek to not only brighten up the Broadway stage during the 1950s and 1960s in roles ranging from the man-searching milliner Irene Malloy to Hamlet’s mother Queen Gertrude, but conquered the TV market too, delighting daytime audiences for not only standing toe-to-toe against Susan Lucci’s Erica Kane character (and later becoming her surrogate mom), but issuing in-your-face lessons on morality to other infamous Pine Valley characters on the classic soap opera All My Children (1970).

Eileen Herlie was born Eileen Herlihy on March 8, 1918, in Glasgow, Scotland, the daughter of a Catholic father and a Protestant mother. She studied and performed for many years with the Scottish National Players before transporting herself to England where she became professionally associated with the late and great director Tyrone Guthrie. Making her official stage debut with “Sweet Aloes” in 1938, she went on to advance in such plays as “Rebecca” (1942), “Peg o’ My Heart (1943), “The Little Foxes” (1944), “John Gabriel Borkman” (1944), “The Second Mrs. Tanqueray” (1944), “The School for Scandal” (1945) and “Anna Christie” (1945) before making a strong impression as Queen Gertrude in “Hamlet” in late 1945. Her film debut came in support of Margaret Lockwood and Dennis Price in the costume drama Hungry Hill (1947), but her huge breakthrough came about when Laurence Olivier cast her as his mother, Queen Gertrude, in his film adaptation of Hamlet (1948) — this despite Eileen being 11 years younger than Olivier, who won the Oscar for his superb work in the title role. Years down the road Eileen would again earn acclaim playing Gertrude in the 1964 Broadway production of “Hamlet” starring Richard Burton and in its accompanying Hamlet (1964) film effort.

The feisty, flaming red-haired Scot took her first Broadway bow in 1955 as hat shop owner Irene Molloy in the highly successful production of “The Matchmaker” with Ruth Gordon starring as Dolly Levi. Eileen also appeared in New York musicals, co-starring with Jackie Gleason in the nostalgic “Take Me Along” (1960), which merited her a Tony nomination, and Ray Bolger in “All-American” (1962). Elsewhere, she graced two of Peter Ustinov’s plays (“Photo Finish (1963) and “Halfway Up the Tree” (1967)) and continued in classic regal fashion with her Queen Mary role opposite George Grizzard’s Edward VIII in “Crown Matrimonial” (1973). She played the same role a year earlier in a TV film version opposite Richard Chamberlain as the abdicating King Edward and Faye Dunaway as paramour Wallis Simpson. Eileen’s last stage role was in “The Great Sebastians” (1974) in Chicago co-starring Werner Klemperer, and her final film part came with a featured role in Chekhov’s The Sea Gull (1968), directed by Sidney Lumet and surrounded by a superb cast that included Simone Signoret, Vanessa Redgrave, David Warner and James Mason.

In 1976, Herlie made a long and permanent switch to daytime soaps. As bawdy, plump-figured carny Myrtle Lum Fargate who later refined herself to a point and operated a frilly boutique store on All My Children (1970), audiences took a special liking to her down-to-earth character whose impulsive bluntness, staunch integrity, briny tongue and heart of gold made her one of Pine Valley’s more beloved residents. She remained in town for over thirty years.

Divorced twice with no children, Eileen died at age 90 on October 8, 2008, due to complications from pneumonia. The stalwart actress continued to act almost to the end, last playing her “All My Children” character in June of 2008.